Granderson's Journey From UIC to MLB 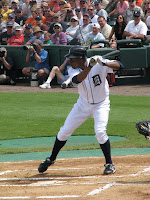 On March 3, snow covers the ground as yet another winter storm passes through Chicago. But 1,172 miles south in Joker Marchant Stadium in Lakeland, Fla., it’s 82 degrees and sunny, as the Detroit Tigers get ready to play the Tampa Bay Rays in a spring training game. For Curtis Granderson, those 1,172 miles represent more than just the difference between the snow and sun. For him, it’s the distance between the Major Leagues and home.

Standing outside the Tiger’s clubhouse in Lakeland, fans call Granderson’s name for autographs after batting practice before he changes into his game jersey. Granderson, 6’1,’’ 185 pounds is in blue and grey Under Amour shirt with a Tigers insignia on the chest, wearing his white game pants with socks pulled up to his knees. He’s charismatic and a line of reporters forms to talk to him.

Granderson, 26, was the first player from University of Illinois at Chicago (UIC) to play Major League Baseball, and the only current player in the Majors that graduated from college in Chicago. Granderson was born in Blue Island, Ill. and grew up in Lynwood, Ill., where he played little league baseball. He attended Thornton Fractional South High School in Lansing, Ill. He made varsity as a sophomore and hit .427 as a senior in 1999, being named All-Area by the “Illinois Times” and “Daily Southtown.”

Ken Reynolds was Granderson’s high school assistant baseball coach and current head coach of Thornton Fractional South. He said Granderson was a pleasure to be around.

“He was a popular student in high school, one of those students who were friendly with all social groups,” Reynolds said. “He was well liked by his teachers throughout his high school career. One thing that always stood out was his willingness to be coached. Not only would he listen to the advice, but he would ask questions to gain a more detailed understanding of the point being made. That appears to have not changed as he moved on to college and pro ball.”

Granderson chose to attend UIC, where he said his goal was to play Division I basketball, but hoped to baseball as well.

“I was this close to playing (basketball),” Granderson, motioning with his index finger and thumb. “A broken thumb in my fall practice sophomore year got me away from that. With baseball, I looked at it and said, ‘I am pretty good at this; let’s see where we can go.’ I ended up having a blowout junior year and I got drafted and the rest is history.”

Granderson was a success from the start at UIC, leading the team in home runs (7) and runs (51) his freshman year. As a junior, he exploded for a .483 average, a UIC record, and second highest in the nation, led UIC in nearly every offensive category, and named 2002 Horizon Lea 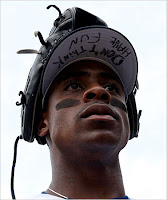 gue Player of the Year.

He said the most important thing he learned at UIC was how to approach the game.

“For me, to allow myself to just go, and I’m still in the process of that,” he said. “My head coach, Mike Dee, always told me to trust myself. He goes, ‘there’s a lot of players who go out there and always have to say go, faster go slower, do this and that. You’re instinct is pretty good right now, just don’t second guess yourself.’ That’s the big struggle I still have.”

After his junior year, Granderson was selected 80th overall by the Tigers in the third round. Chicago is not known as a baseball haven, as the northern weather prevents players from playing year round, but Granderson said he was never concerned about coming from a Midwest state for his baseball future.

“Once I got going it was one of those things where it was ‘just keep playing,’” Granderson said. “I was in this world where everybody was so called even and now it was, ‘how can I separate myself?’ I looked and my weaknesses and tried to figure out how I could turn those into

positives and keep asking questions, keep trying to get better.”

His teammates had high praise for Granderson. Bryan Russo was a freshman infielder in Granderson’s final year at UIC. Russo, who graduated in 2006 and attending paramedic school, said Granderson was the “hardest working guy on the team” and a leader on and off the field.

“Not only was he a great ball player and knew a lot about the game, he is one of the nicest, non-selfish people I have ever met,” Russo said. “I could talk to Curtis about anything.”

Nelson Gord and Granderson both started at UIC together as freshman. Gord, from Buffalo Groves, Ill., was a utility player and played Independent League ball after college and now coaches baseball in Schaumburg. He says Granderson was a “great” teammate.

“Great example of him putting the team above himself happened in a midweek non-conference game our sophomore year,” Gord said. “He had a ‘slash’ on (fake bunt/hit-and-run) and he was supposed to hit the ball on the ground. He pulled the bunt back and swung and hit a two-run home run over the fence in left-center. He came back to the dugout upset because he didn't ‘do his job.’ Selfless.”
Even though Granderson was drafted as a junior, he went back to school while playing in the Minor Leagues and graduated with degrees in business management and business management. He said he became interested in business after taking an intro class as a high school senior.

“When I got drafted, I told the Tigers I wanted to finish school, because at the time I didn’t know how long I was going to get a chance to play this game,” Granderson said. “Did I want to be a pro? Yes. Was I going to happen? I didn’t know. Both my mom and dad teach, my sister teaches as well, and school was never a difficult thing for me, so I enjoyed going to class.”

Granderson started his professional baseball career in 2002 with low A-ball Oneonta, where he hit .344 in 52 games. He progressed quickly through the system. After being named to the AA All-Star team in 2004, he was a late-season call-up by the Tigers, making his Major League debut September 13. He was in the Majors for good at the end of 2005. In 2006, he became the Tigers’ starting leadoff hitter and centerfielder and they went to the World Series.

In 2007, Granderson established himself as a star and one of the game’s most popular players. Despite not being listed on the All-Star ballot, he had the most write-in votes of any player, with 376,033. He became the third player in history to have 20 home runs, doubles, triples, and stolen bases in a season, and the first in 50 years, and his 23 triples were tops in the Majors. This off-season, he signed a 6-year, $30.25 million extension with the Tigers.

“He has always been a great player,” Gord said. “But now he had put himself in a category that virtually no one reaches.”

Despite Granderson’s successes, Gord says he never thought about Granderson playing in the Majors until he was drafted.

“Once he went out and hit 20-plus home runs in AA, I knew it was just a matter of time,” Gord said. “I'm sure he would be the first to tell you that when we came in as freshman no one thought he would be doing the things he is now.”

Off the field, Granderson has become an ambassador for the game. This winter, he traveled to England and Africa to promote baseball. He worked for TBS as an analyst during the playoffs, blogs regularly for espn.com, and frequently updates his MySpace. He founded the Grand Kids Foundation in 2006, where he puts on events like charity dinners and basketball games to benefit educational programs and inner-city baseball programs.

“I love being any type of positive role model, from the baseball spot to the education spot, having graduated from UIC and playing baseball,” Granderson said. “Any way to get to that spot and say, ‘I’m from the city of Chicago, I graduated college, I also get the chance to play this sport, so there are a couple different avenues that being in the same shoes that I am, as an inner city kid or a suburban kid, you could have the same opportunities I’ve had.”

“Even after Curtis made headlines with his .480 average and we made it to our first NCAA regional, we were still flying under the radar,” Gord said. “It wasn't really until Curtis put up his 20/20/20/20 line last year when people started opening up their eyes to the kind of program UIC has. Curtis has definitely helped this process and has been a draw and topic of conversation when it comes to Chicago area players, UIC, and doing things the right way.”

At his high school, Granderson has worked the instructional clinic every year since he was drafted, and lifts weights and conditions with the high school players in the offseason. He also donated money and equiptment to the school’s baseball program. Reynolds says Granderson has “absolutely” influenced kids in the area to play baseball.

“He is so natural around young children, both as a teacher of the game and an advisor of what is really important - grades, family, having fun, etc.,” Reynolds said. “He is also very eager to try and help stimulate a rebirth of interest in the sport within the African American population. At our clinic in February, he spent quality time with a large group of mostly 8 to 12 year-olds, many of whom are just now beginning to really realize how good he is.”

Even with his Chicago roots, Granderson is making his presence felt around the world in a sport not usually associated with the area.

“Despite his recent rise to fame and a larger checkbook balance, he remains very grounded in what's important in the world,” Reynolds said. “I do not expect that to change because of how well he was raised by his parents. I've said many times to many different people, Curtis is a great player, but he is even a better person.”