We went out for a walk looking for places to be open, hoping for something like a McDonald's to be where they would just let us sit and hang out for a while. There were some bars but none looked that great.

We went to The Great Scot and ordered coffee. Since it was something like 1:30 am, the coffee was rather old and they just gave it to us for free. Free Norwegian meals is awesome. Granted, it was awful, but we didn't really care. 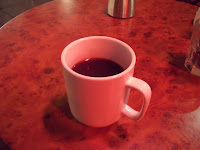 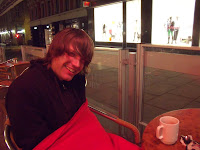 We went and sat outside under a heating light and they had blankets you could use too. It was really nice. Around 3:15 the place closed down so we were out to look around some more.

Snacks was open, a sort of little pizza/burger place. We got tiramasu and hung out there until they closed around 4:10. 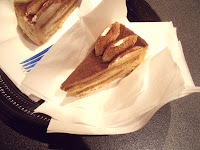 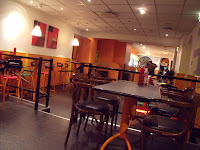 Since we only had to wait until 4:30 until the train station opened, we went into 7-11 across the street and pretended to look around for a while. Unfortunately I did something really stupid. I took this picture. 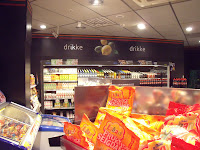 It looks pretty harmless, but when we tried to leave, a huge security guy and another guy blocked the door and surrounded us, asking us if we had anything we shouldn't in our bags. We were rather confused and said nope. They saw me take the photo and thought it was of the security camera (which is visible in the shot) and said that they had called the police. The Norwegian police were called on me because they thought I was going to rob a 7-11. Absolutely hilarious. They said it was because there are robberies and stabbings all the time on that street

I explained my whole story, about the blog, and all that, and they seemed to buy it. It didn't hurt that we were Americans leaving in two hours, clearly not trying to rob the place. The police came and I was taken outside, frisked, and my bag looked through. They looked at the photo and let us go. We ended up joking with the police, it was all fine and a great story.

We went to the train station and slept for a while before making it over to the bus station and get on the bus. I slept on the way back too. 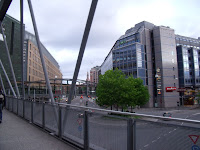 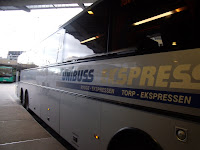 The plane was fine, I slept on that too, not a ton though. I ended up not sleeping on the EasyBus either, but when I got back I slept for about five hours.

I went to try to get a new SIM card, but it was closed, so I went and sat in Paddington Garden and read Sherlock Holmes a little, but it was getting dark so I went to Tesco and got a little food and came back to work on the blog. I got a Ripple bar, which is sorta like a Flake or Twisted bar, except from the Galaxy people. It was good. 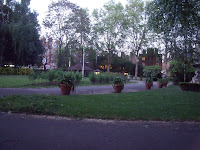 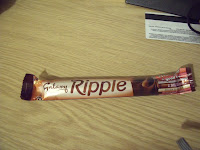 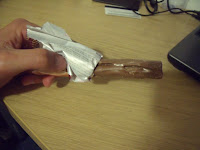