We got up at 7 and went to the breakfast, which was even better today since it was early and lots of food still out. 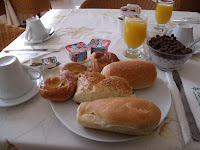 After showering up and getting everything ready we tried again to go to Cafa Hafa. We went up through the Cashbah and wandered around, not really knowing where to go or anything other than in the general direction.

We had sort of an address but we couldn't figure out exactly where to go, so we just walked, even stopping in a hotel and looking at a map but still couldn't figure it out. I don't know how the Beatles found it.

We did end up going over by an elementary school that was letting out for some reason. It was fascinating to see how the kids were. Many had American backpacks, including a Batman and a Barbie with a head scarf. Really interesting. None of them bothered us, I don't know if there is a difference between the kids that do and don't or if the ones that do go to school or not, it's all so interesting. 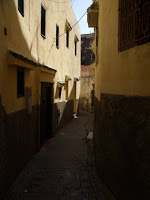 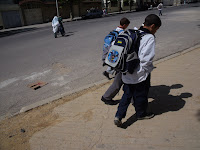 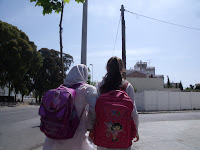 We went down into the Cashbah and went into some stores. We still had about a half-hour left so we went to Esquima, an old looking cafe over by our hotel. We got a coffee for 7 dirhams and and went back to the room to get ready to leave. 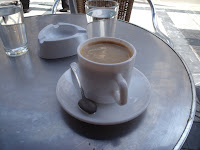 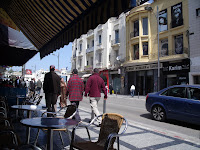 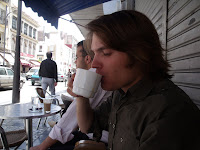 The cab ride was super easy and rather nice, I put down the window in the backseat and since this was the hottest day so far, the wind felt great. The cabs in Tangier have been the only times I've been in cars since January, crazy. 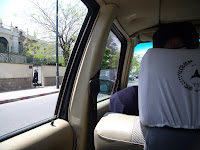 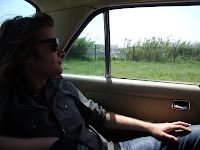 The Tangier airport is very small. And super weird. When you arrive, you put your bag through an x-ray machine. I don’t know if anyone actually looked at it. Then you enter the waiting area, which has one desk area for all airlines.

After waiting in line (and having a Spanish lady turn and sneeze on me) we got our tickets and were all set with about two hours to go.

I went on the computer and read about and uploaded some photos. We changed out currency and got went to the customs.

This was probably the best customs/security time I’ve ever had. We had to fill out a little card for customs, and it asks for a profession, and since I’m not really a student anymore, I put writer. No one ever questions you on this because it really don’t matter. You can basically write whatever you want there, it’s like putting Dr. on the title of a bus pass. The guy asked what kind of writer, and I said journalist. Then he asked where I wrote, and I said Chicago Tribune, which he made me spell out Tribune. All this time we are pretty worried about catching our plane because the gate supposedly closed in a minute, just great.

Then I got to security, a single x-ray conveyer belt. I went to take out my liquids and computer and the guy stopped me and told me to just put it through. I went to take things out of my pockets and he just waved me through. Since I had all sorts of metal still on me, the alarm went off, but no one seemed to care at all, so I just got my bag and continued. Not really the most reassuring check ever, but probably my favorite. At least they didn’t ask me if anyone suspicious had put anything in my bag.

The flight was fine, it was windy by not like before. I was a little motion sick again at the end, not a great habit to start. The flight was only an hour, but we went ahead two hours somehow, which we couldn’t figure out at all.

We texted Annie and found out they were staying at the same hostel we were so we would just leave our bags there. Awesome. We found the Metro, and since we were pros by now, we got there easy.

They were a little late so we sat in the square for a while. It was really nice out, much nicer than it had been when we were there. 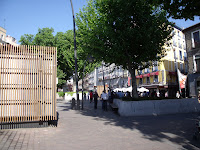 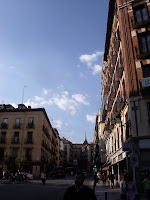 They stayed on the second floor and we threw our bags in there. We called to make reservations for Botin, which according to Guinness, is the oldest restaurant in the world, as well as a strong Hemmingway association. I was pretty pumped.

We walked around for an hour to and stopped to get pastries. I had a huge pastry filled with fruit and topped with chocolate. Too bad it actually cost money.

We got to Botin and were easily the most underdressed. Annie was with two of her friends, Joey and Ryan (who looks like Demetri Martin) and they were in t-shirts. Oh well, it is a huge tourist place anyways.

The inside does look old (supposedly started in 1725). They took us up to the third floor and stuck us in the corner, out of sight I figured.

I ordered the Segovia Mushrooms and a coffee. The brought out bread but it was one of those pay-but-don’t-tell-you deals which I hate. Bread shouldn’t be teased about.

When my meal came out, there was naturally meat on it, but only small easily removable chunks. After Figueres, I wasn’t phased.

The mushrooms were really good, although I doubt Hemmingway ever ordered them. The interior was interesting, it’s something I’m really glad I did.

After dinner we looked in Annie’s Rick Steves book for a churro and hot chocolate place. It suggested this old place not too far away. We sat outside, which was great. The Churros were different, crispier then the ones before. It was really awesome (and cheap).

We walked back to the hostel, the nice day started to get chilly. We went back up into my favorite lounge area and I went on the internet for a little. Annie wanted to use my computer to check her email and I only had about 15 minutes before we had to leave to go to the train.

We had no problems with the trains, although I was really tired.

We got to the airport around two. We quickly realized a problem in that we had to get our tickets stamped to go through security so we were stuck outside of all the fancy chairs by the gates along with seemingly everyone else traveling.

We looked around for a good spot, settling under a stairway in the very back end of the airport.

It was alright, until a cleaning lady came by on her little cleaning machine and went back and forth forever on the same spot. Better yet, when she went by the automatic door, a cold rush of air would come in.

I slept a little bit and got up around 5 to go get stamped and find good seats. We went over by a window where they had long rows of chairs without arm rails. It was relatively nice, although the seats were pretty hard.

We got up for the flight, which was pretty normal. I slept most the way and didn’t get sick at the end, always a nice
Posted by Scott Bolohan at 11:26 PM